Traveling on bicycle is a great opportunity to smell, taste and feel the vibes of a new place. Furthermore it is a great way of learning as well.
Our latest trip to the North East Cambodia and the Central Highlands of Vietnam got us into vast areas of rubber plantations.
As you know already we use latex on the soles of our wooppers so naturally I wanted to know more… 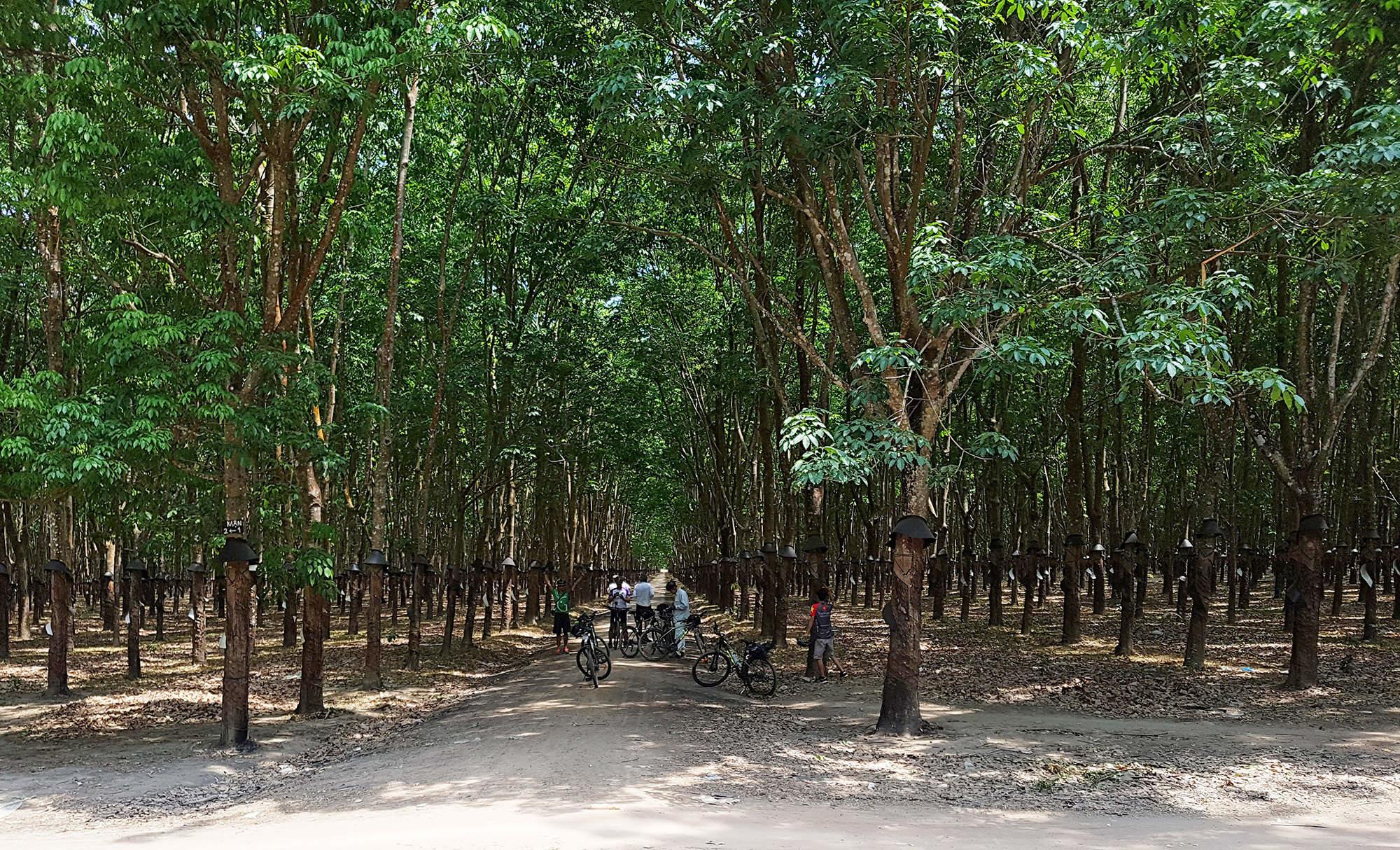 Pará rubber tree (Hevea brasiliensis) is commonly known as the rubber tree. It is native to tropical South America but now is cultivated in many tropical countries and mainly in South-East Asia.
The plant produces latex, a milky colored sap that comes from its bark and is used in the production of rubber. Latex was already used by the Aztecs to waterproof their clothes and shoes.
Today most Pará rubber (natural rubber) is produced from trees grown on plantations in Asia and to a lesser extent in Africa.
Rubbers today are natural or petroleum products and the consumption is is ever increasing for both. China is the principal consumer globally.

The bark of the Pará rubber tree has lactiferous vessels (little tubes) that produce latex milk. To get the latex a series of little cuts (about 4mm deep) must be performed spirally around the bark, a method called tapping. The cuts should be deep enough to cut through the latex vessels but shallow enough as to not damage the tree deeper and affect its growth. The small incisions form a left hand spiral of 25° to 30° around the trunk, for the latex vessels spiral to the right at an angle of about 30° from the horizontal.

At the end of the spiral cut the workers (tappers) attach a little cup. The latex milk flows along the cut into the channel and drops into the cup. Sometimes a rustproof spout is attached to facilitate the process.

Tapping starts after5-7 years of a new plantation. To get a good harvest tappers tap the trees early in the morning when the latex flow is greatest. The trees drip latex for about 4 hours. They then stop as latex coagulates naturally on the tapping cut, thus blocking the lactiferous tubes of the bark. During this time the workers will rest and have a meal and then they will return about midday to collect the latex. The process will be repeated after two or three days on the same tree.

After 7 years when all the bark is tapped the process starts all over again.
This can be done three times, so after about 30 years if more rubber is needed, it is time for a new plantation.

The black cup above the incisions protects the harvest from the rain. The new spiral cut is done above the previous one. A metal spout guides the flow into the cup.

It was “winter” when we visited Vietnam and Cambodia, which means dry season. During these 2-3 months tapping stops. It is then time for the tree to grow and for maintenance work to take place.

A resting period – The trees heal and grow and maintenance work takes place.

A station (where the latex is gathered and the cups are cleaned and maintained) and a rubber producing factory among the plantations in Cambodia.

Rubber trees grow fast. They can reach 30m. After 30 years of harvesting they will give all they got and then it is time for a new plantation.

Production of natural rubber is ecological.
In comparison to the production of synthetic rubbers from petroleum, the rubber tree is a kind of “green rubber factory”. It uses the sun as a renewable energy source, the atmosphere’s CO elements, water and mineral elements of relatively poor soils. It gives latex in return. During production both liquid and coagulated latex is collected for use.
The by-products are biodegradable and rubber itself is recyclable.
The rubber tree ideally can be used to reconstitute new forests on poor or degraded soils. Further more the wood from the rubber tree is increasingly used as timber.

All this is great! isn’t it?

So why is one overcome by sadness when witnessing the jungle burn away?

Wild fires eating away the jungle during the dry season in North East Cambodia. What happened and continues happening in the Amazon is happening here as well…

Already between the years 2007-2012 in Vietnam 79% of newly-established rubber plantations were converted from natural forests.
It shows that the counrty’s Rubber Plantation Development Strategy is difficult to implement. The Strategy requires that local governments: “Establish 150,000 ha of new rubber plantations on unproductive agricultural and unused land, or convert degraded, poor natural forests which are suitable for growth requirements of rubber trees.” Instead, natural forests are sacrificed with further implications regarding illegal logging: Along the supply chain, illegally harvested timbers mix with legitimately converted timber making it quite difficult to control timber legality.
The same tactics are rapidly followed in Cambodia now, where big firms from Eastern Asia move in. Furthermore poor salaries do not benefit the local populations who turn to illegal logging, thus completing the destruction of the forests.

It is a huge challenge for the authorities in those regions to exercise control over the appetite of the big companies and enforce regulations. if they do not succeed, rubber plantation expansion will benefit neither the rural poor – whose daily subsistence largely depends on forest resources, nor the planet in general.

The rural poor can reap the benefits of regulated rubber production.

Notes:
Some figures on the rubber plantation expansion were taken from the study “Rubber Expansion and Forest Protection in Vietnam” by To Xuan Phuc & Tran Huu Nghi on behalf of Tropenbos International Viet Nam
Our cycling trip was organized by Grasshoppers Adventures to suit our needs and the result was absolutely tops!!

About the author: chryssa

No other information about this author.